DLMS or Device Language Message Specification, is the suite of standards developed and maintained by the DLMS User Association and has been adopted by the IEC TC13 WG14 into the IEC 62056 series of standards. COSEM or Companion Specification for Energy Metering, includes a set of specifications that defines the Transport and Application Layers of the DLMS protocol.

The DLMS User Association defines the protocols into a set of four specification documents namely Green Book, Yellow Book, Blue Book and White Book. The Blue book describes the COSEM meter object model and the OBIS object identification system, the Green book describes the Architecture and Protocols, the Yellow book treats all the questions concerning conformance testing, the White book contains the glossary of terms. If a product passes the Conformance Test specified in the Yellow book, then a Certification of DLMS/COSEM compliance is issued by the DLMS UA.

The relevant IEC standards are as follows:

Automatic Meter Reading, or more general - Demand Side Management - needs universal definitions, needs communication standards. DLMS/COSEM is the common language so that the partners can understand each other. source: http://www.dlms.com

Being an object-oriented open international standard, DLMS/COSEM is the de-factor AMR standard in most part of the world. It is well organized and facilitates the interoperability among devices and systems from different vendors. The DLMS/COSEM standard offers compliance testing tools to verify the compliance of meters.

As a member of the DLMS UA, Microstar is among the first companies in the world to supply DLMS compliant meters. Microstar and its research facility Bluestar Meter Research Institute have been an advocate for the adoption of  DLMS/COSEM standard for its merits. Microstar/Bluestar has also offered DLMS compliance testing service to other meter manufacturers. 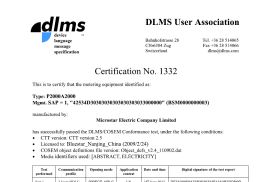 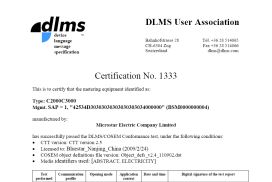 We use cookies to ensure the best experience on our website. If you continue to use this site, it means you are OK with it.Got it